Have you ever been bullied? Maybe you were picked on, or maybe a close friend dealt with bullying. How far would you go to see that justice was served in that sort of situation?
MTV has taken matters into their own hands with the show “Bully Beatdown.” The idea is based on giving bullies a taste of their own medicine. Here’s the concept: A teen who is frequently picked on will submit their story to the show. If they are chosen, a camera crew comes to their hometown and films segments of their lives. They also interview and film the bully involved. You might wonder why someone would participate in such a show if they knew they would be portrayed negatively—well, they are given the opportunity to win money. Some of them truly believe they are in the right, one bully even claiming they were “teaching their victim how to be a man.” After the introductory segments, the bully is brought into a boxing ring surrounded by a jeering crowd. They are joined by a professional fighter. While the victim watches from outside the ring, the two grapple in an effort to pin the other. With each pin, the winner earns $1,000. After the money round comes a boxing round, during which the professional essentially beats the living daylights out of the bully for minutes on end.
Almost every time, the victim wins all the money and the bully is thoroughly humiliated, and often quite battered. Does this sound like justice to you? Realistically, a teenager has little to no chance up against a professional fighter. Maybe the victim gains a little confidence, maybe the bully has seen the error of their ways, but is violence really what it takes to accomplish this? In the end, the bully is just a kid, and it seems to me that the actions carried out are far too harsh for the situation. Think about it, after the show is over and everyone goes back home, what happens next? The bully feels as if they were humiliated on national television, and the person to blame is the victim. There is a good chance hurtful behavior is perpetuated by the show Bully Beatdown.
Then again, a bully’s power often comes from the fear they create in the school or community. Once they have been exposed on television, that fear may largely dissipate. So it is possible that the show does help bullying situations, if not in the way they originally intended.
What do you think? Should we combat violence with violence? Do bullies just need a good ass-kicking? I’m not so sure MTV’s Bully Beatdown is sending the most helpful message on this topic. 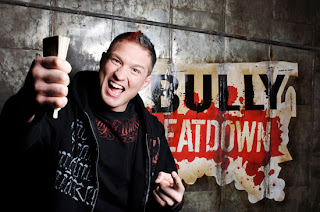