What does diversity mean to you?

Yesterday was the first annual Diversity Day at Ramapo. The event was a fun filled festival that featured music, dancing, different cultural foods, and more.  Many people showed up in order to learn about the many different cultures, lifestyles, and overall differences we have at Ramapo. As coordinator of the event it was an amazing feeling to see such a positive spotlight placed at Ramapo.

Many of the clubs did different activities involving games, trivia, prizes, and more. My club, the Diversity Action Committee student club, had an activity where people wrote what diversity meant to them or their idea of the definition of diversity on leaves and then placed the leaves on our "Diversitree." 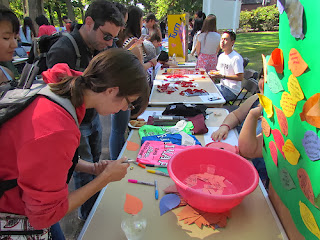 People had a lot of interesting and different things to say about what diversity really was. Some popular ideas about diversity were that diversity is when you can truly be yourself and diversity was embracing difference. One person wrote, "Diversity is learning something new everyday." There were really a huge amount of different perspectives on what the definition of this abstract concept was. The best part about this is that everyone is right in their own way, since the idea of diversity has so many facets.

All of these different perspectives made me think of my own definition. To be honest, I don't think I could just sum up the definition on a little leaf. I think it took all the leaves on the "Diversitree" to sum it up for me, because ultimately diversity is community and people coming together to share different ideas and perspectives.