I spent a lot of time this Spring Break thinking about emotional and verbal abuse.  I thought about what behaviors qualify as abuse. I tried to learn why abusers do what they do (and then briefly considered becoming a neuropsychologist.) I cried for those who have been affected and are affected by this atrocity (and then considered becoming an art therapist.) What was most challenging was trying to wrap my mind around the fact that such unimaginable evil exists in this world and that so few people are aware of it, much less care to help put an end to it. How, I wondered, could something as real and serious as abuse go unnoticed so frequently?

The first explanation I came up with was that observers seem to have a much more difficult time identifying behaviors as emotionally or verbally abusive than as physically abusive. Anyone taking an honest look at middle and high schoolers, for instance, will note that these kinds of abuse run rampant in these populations. In the throes of the personal insecurity that comes with adolescence, these pre-teens and young adults seem to use verbal bullying as a means of keeping themselves afloat. Furthermore, I know from my own personal experience that the issue is rarely given the attention it deserves in this context. I remember faculty members at my middle school repeatedly dismissing the interpersonal aggression displayed by many of the girls in my class as no more than a stage, something they'll grow out of and forget about once they get older. The scathing remarks, the blatant social exclusion, the gossip and manipulation- all dismissed by administrators as harmless bullying. Only one adult in the entire school bothered to suggest that what was happening could be something as serious and deserving of their attentions as abuse. 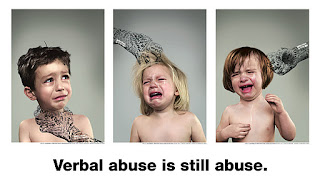 Cases of verbal and emotional abuse that occur among friends, coworkers, and partners, seem to be ignored and dismissed in a similar fashion. The battle that someone struggling with Post Traumatic Stress Disorder, depression, or anxiety must fight as a result of an emotionally or mentally abusive relationship seems to go unacknowledged by the general public. I’m not sure if this is because people are uncomfortable discussing these issues or because they are simply unaware of their existence. What I have realized, however, is that this pattern of ignoring and dismissing these kinds of situations in effect leads to blaming of the victim. Upon reflection, I realized how easily a victim of abuse could blame him or herself for taking issue with a situation in the first place. Just think about it. It seems unlikely that an abuser would ever admit to being wrong; relatives can encourage victims to keep things secret for fear of bringing shame to the family; politicians rarely address the issue and the media seems to do so even less frequently. Realizing all of these things, it seems very reasonable that a victim would come to the concluding explanation that he or she is simply being oversensitive, not being aware that their discomfort with the situation is in fact valid.

This, dear readers, is NOT okay. The fact that this kind of abuse exists in the world is, as I have mentioned, horrifying. What is more distressing, however, is the fact that we as a society stand by and let it happen, let it progress, let it ruin the confidence of capable and strong people, let it permanently change lives. We must stand up against this kind of behavior when we see it happening ourselves, and we must actively engage in conversations about what abuse is, what causes these behaviors, and how those affected by it can get help. We must ensure that those who are mistreated will be educated enough to recognize the danger and legitimacy of their situations, and that they will have the confidence and support necessary to remove themselves from them.