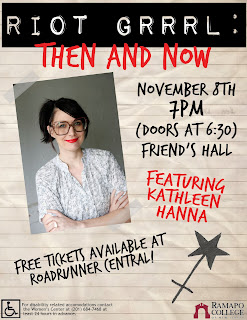 She took the audience through the history of the Riot Grrrl movement, which came into existence very organically as the result of Kathleen and other awesome musically-inclined feminists trying to change the punk scene to one that was safer for women.

Through out the talk she asked the audience to think about our "breaking point," the moment(s) in our lives that inspire us to action. This, also, helped to put a lot into perspective for me.

I think my biggest breaking point was finding out that I could have had another aunt, had my family not lost her to depression and anorexia before I was born. Learning about my Aunt Jody as a teenager is what made me strong in the face of all the insecurities that growing up had to offer... it's what allowed me to love my body even when it was the last thing I wanted to do. Helping other people to stop hating their bodies and themselves as well is what initially drew me into the Women's Center and feminism.

Volunteering at the Bergen County Rape Crisis Center is another sort of breaking point. Each time I speak to a survivor or someone close to someone who has been assaulted I am reminded again why this work is so important. Being able to help someone feel even just a little bit more empowered after an assault is such a powerful thing, despite how emotionally taxing it can somehow be.

I have a million breaking points, if I am being honest. Each day seems to bring a new reason to keep fighting, keep working to change the world around us... yet each day also brings new reasons to feel tired and burnt out. It can be a struggle sometimes.

Luckily for me, at the speech Kathleen also gave some of the best advice I have ever heard in regards to being an activist without burning out. Towards the beginning of the presentation Kathleen spoke about volunteering at a shelter in Olympia, helping survivors of sexual and interpersonal violence. She talked about how important that work is, but also how draining it is. When she recognized herself burning out Kathleen decided to try and make her work more sustainable, by injecting something she loved (designing flyers, zines, making music...) into the mix. This combination of advocacy & art is what eventually helped to inspire the Riot Grrrl movement.

(Did you know that the people involved didn't call it Riot Grrrl at first... that was actually the name of a zine that a few of the original Riot Grrrls were producing. When the press started calling them Riot Grrrls, because it was catchy, they just went with it!)

Kathleen encouraged those of us in the audience to figure out what makes us angry, what we want to change, and then to figure out how we can combine that with something we never tire of doing to help create powerful actions that we can sustain. This honestly blew my mind... to realize that Kathleen and the other awesome people involved in Riot Grrrl weren't setting out to create a MOVEMENT and CHANGE THE WORLD... they were just trying to do what they loved and make their communities a bit better.

They made history without even trying to.

I'm not sure about anyone else, but I know that when I think about the future I often find myself getting intimidated by the pressure I feel to make "something" of myself by making some sort of HUGE impact on my community. To realize that one of the people I have looked up to in my feminist journey never set out to become a major figure in feminism's history... she was just trying to make & perform music, but to do that she had to fight to make some major changes to the punk scene that was (and often still is) hostile towards women.

This may sound a bit idealistic, but to me the Riot Grrrl movement shows how people like you & me can come together and use our own unique skills to change our communities in meaningful ways. All it takes is recognizing our breaking points, and then doing something (anything!) about it.


So, I want to know... what's your breaking point? What do you want to change? And what's stopping you from getting out there & doing it?
(Check back in a few days for the video interview that Kathleen was nice enough to stick around for after the talk!)
Posted by Jill at 4:04 PM